Should we perform an Incident Investigation for Hail Damage?

The Issue: Recently an industry friend reached out with a question that I thought was worth sharing. They recently had some fierce storms roll through their area that involved tennis-ball sized hail. This hail caused some insulation damage, but didn’t cause any ammonia release. Here are some pictures of the type of damage they experienced. 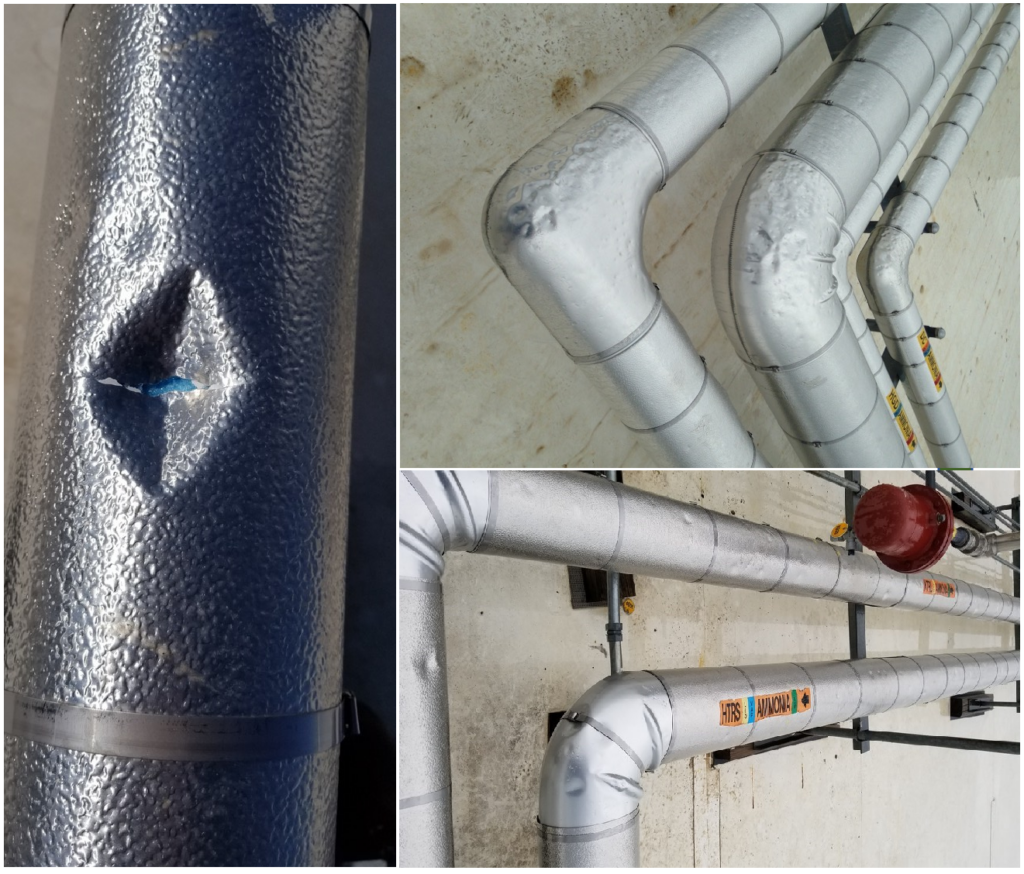 The question is “Would this require an Incident Investigation?”

The Law: As always, first we look at the law.

OSHA 29CFR1910.119(m)(1): The employer shall investigate each incident which resulted in, or could reasonably have resulted in a catastrophic release of highly hazardous chemical in the workplace.

EPA 40CFR68.81: The owner or operator shall investigate each incident which resulted in, or could reasonably have resulted in a catastrophic release.

While there is obvious damage to the protective jacketing and vapor barrier, you could make a defensible argument that this is not something that could “reasonably have resulted in a catastrophic release of highly hazardous chemical.” That’s not to say there isn’t any value to such an investigation, but that there most likely is not a requirement to investigate this incident based solely on the PSM/RMP rules. But, the rules aren’t the only guidance available to us, so let’s look further.

RAGAGEP and Written Programs: In my opinion, the best RAGAGEP available on the topic is the CCPS book Guidelines for Investigating Chemical Process Incidents, 2nd Edition, which is what inspired the approach we take in our Incident Investigation element Written Plan. Similarly, the IIAR’s publication PSM & RMP Guidelines makes roughly the same types of arguments and include an EPA suggestion that any damage of $50,000 or more should be investigated. If you’ve priced insulation recently, you know we’re likely to hit that threshold.

Here’s the relevant part of our Incident Investigation element Written Plan which incorporates the CCPS guidance:

An Incident is an unusual or unexpected occurrence, which either resulted in, or had the potential to result in:

That definition implies three types or levels of incidents:

Near Miss – An occurrence when an accident could have happened if the circumstances were slightly different. We sometimes call these incidents “An Accident where something went right”. (Forklift strikes an air unit causing only cosmetic damage and no Ammonia is released, an activation of an automatic shutdown, etc.)

Process Upset / Interruption – An occurrence where the process was interrupted. (Vessel high-level alarm, a nuisance ammonia odor report, ice buildup on an air unit preventing it from cooling properly, failing to conduct required PSM activities as scheduled, etc. Many Process Interruptions are fixed before the event leads to a shutdown. If the equipment was shut down manually or automatically in response to an unexpected occurrence, then the incident is to be investigated as a Near Miss.

This storm damage would seem to trigger the “Significant damage to property” part of the Incident definition and classify it as an Accident due to “property damage.” In accordance with the relevant RAGAGEP and our element Written Plan, we’d expect you to conduct an Incident Investigation despite a defensible argument that the PSM/RMP rules do not require one.

What we accomplish with an Incident Investigation: With a formal assessment of the incident, we’re hoping to document the following:

Conclusion: While it seems pretty clear the PSM/RMP rules themselves wouldn’t require an Incident Investigation, RAGAGEP would and there’s much to be gained from one.