RAGAGEP Deficiencies and building a defensible case for an alternative solution

This issue: During a PHA, the facility is using an IIAR 2-2014a checklist and finds that the installation does not meet the requirements of section 6.14.3.3.

6.14.3.3 *Machinery room exhaust shall be to the outdoors not less than 20 ft (6 m) from a property line or openings into buildings.

The distance from the machinery room emergency exhaust outlets on the roof to a rooftop door leading into the building is approximately 8 feet. This is a 1910.119(j)(5) deficiency and a 1910.119(d)(3)(iii) RAGAGEP violation. They have a recommendation to address the issue. 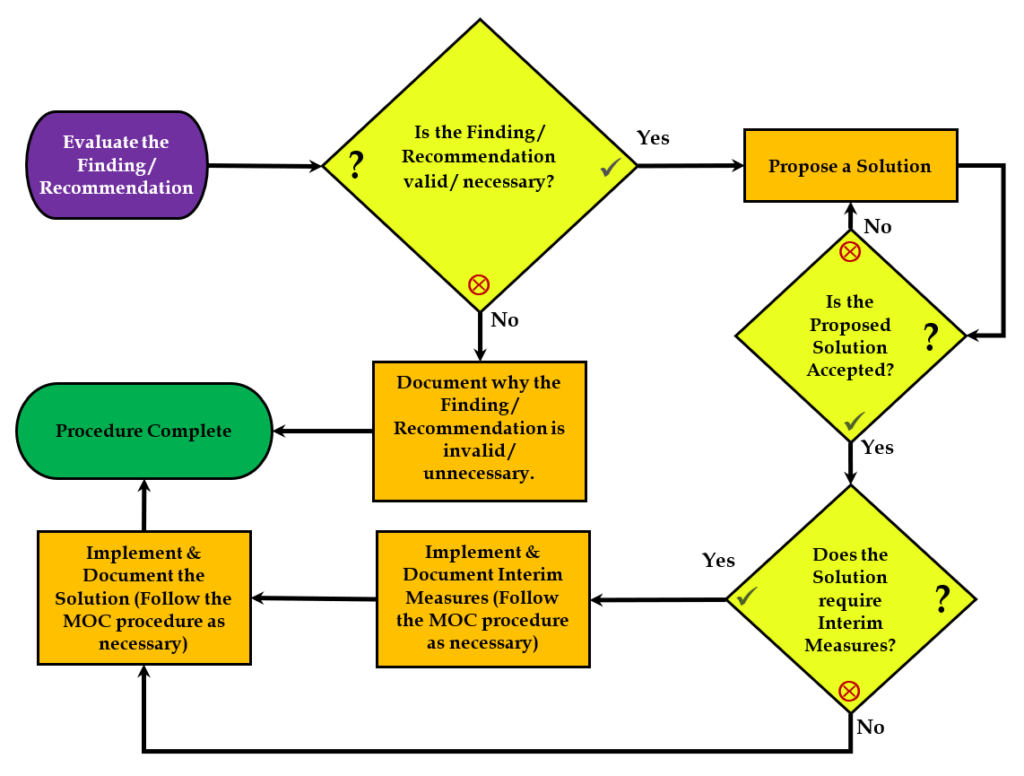 Let’s think about the implications of this issue.

The Analysis: If there was an ammonia leak in the machinery room that activated the emergency ventilation, then the fans would exhaust on the roof very close to this door. In PHA terms, this could be thought of as a “siting” issue.

This situation is pretty rare: only technicians are allowed on the roof, and they are only up there for routine inspections and maintenance. Still, there are two ways the technician could be exposed to this hazard. If they used the door to:

For situation #1, a release would be easily observed / heard while on the roof in the area of the ventilation fans. There are also other entrances back into the building, including external stairs to the ground level. The team decided this situation was acceptable without any changes.

For situation #2, it would be possible (although not likely due to the noise of the fans) that someone could use the door to access the roof without knowing that they could be exposed to a release on the other side of the door. The team decided this was an unlikely, but possible issue. That is – it’s an unlikely turn of events that a release in the machinery room would occur at the same time as someone would be using the door – but it was possible so it should be addressed.

Obviously, the cleanest solution would be to move either the door or the fans, but that’s not an easy thing to do! Also, it would be a very expensive fix for an issue with such a low probability of occurrence.

The team brainstormed a bit and came up with an alternative plan to address the issue.

The chosen Solution: First, there are only two ways the fans could be exhausting a large amount of NH3 vapor. Either they would me manually operated due to maintenance / leaks or they would be automatically operated due to the IIAR 2-2014a 6.14.7.2.1 required NH3 detection interlock. Either way, a RUN signal is sent to the fan controls and the team decided to install a visual alarm on both sides of the door and use this RUN signal to activate it. Coupled with proper signage and training, the team believes the alarm would provide adequate warning to anyone approaching the door that the emergency ventilation system was running and that the door should not be used.

The team believes this is a defensible solution to non-compliance with IIAR 2-2014a 6.14.3.3. I tend to agree with them – it’s defensible if imperfect.

Perhaps another, actually compliant solution, would be to install ductwork on top of the emergency exhaust fans to raise the exhaust point so the distance from them to the door would meet the 20-foot requirement. Of course, such a change would require a new ventilation calculation to ensure the additional restriction caused by the duct work didn’t pose a problem. This ducting solution would likely be a bit expensive and that could mean that it would take some time to implement. If this duct solution was chosen,  the earlier “alarm” idea would be an excellent interim measure until approval and construction of the ducting project occured.

Note: This 20’ requirement appears to show up first in IIAR 2-2008a effective August 2010. Previously the requirement was a vaguer “13.2.3.11 The discharge of air shall be to the atmosphere in such a manner as to not cause inconvenience or danger.”